Collet-Lok® is a family of hydraulic workholding products that utilize Depressurized Holding Technology™. The Collet-Lok® family includes swing clamps, push cylinders, and work supports in multiple configurations. Collet-Lok® protects fixtures from loss of clamping force due to unintentional loss of hydraulics. Hydraulics are required to initiate the clamping and to un-clamp, but hydraulics are not used in maintaining the clamp force. Once initially clamped, an internal mechanical locking mechanism is actuated, which holds the clamp at full force. Once mechanically clamped, absolutely no hydraulics are used to maintain the clamp force! The clamp will hold full force even if the hydraulic lines were accidently severed!

The previous chapters explained that workholding is a fundamental task in metalworking involving three distinct steps: locating (positioning), supporting, and holding (clamping). Chapter 3 highlighted two long-established methods of accomplishing the task: mechanical and power workholding. Mechanical clamping components such as bars, springs, nuts, and bolts offer simplicity, easy customization, ready availability, and low up-front cost. The static nature of mechanical clamps means they can remain locked down, securing a part indefinitely with no external intervention. Power workholding usually depends upon hydraulic systems. It is fast, powerful, compact, and provides highly repeatable results at the lowest long-term cost. A conventional workholding hydraulic system requires either valving or a continuous power source to maintain clamping force. What if you could get the security of mechanical clamping with the speed, power, and accuracy of hydraulics? Enerpac’s Collet-Lok system provides the best of both worlds.

Collet-Lok® Workholding
The unique Collet-Lok system from Enerpac combines the benefits of hydraulic workholding with the long-term stability of bolted mechanical fixturing. Collet-Lok provides the speed, precision, controllable clamping force, safety, and automation compatibility of hydraulic fixturing. But in addition, once the part is positioned, supported, and clamped, the cylinders are mechanically locked in place so that all hydraulic pressure can be removed for any length of time. When clamping is completed and locked, the fixture can be entirely disconnected from the hydraulic system, or even if left connected, it is not dependent on the hydraulic supply to retain clamping force. Collet-Lok is particularly valuable when applied to palletized fixtures. The load holding valves and accumulators required for conventional hydraulic cylinders are eliminated. Additionally, Collet-Lok eliminates the conventional-system concern that any small leak may cause loss of clamping pressure. The mechanical lock arrangement in Collet-Lok components replaces the accumulators, load holding valves, and other complexities of live hydraulic palletized circuits. 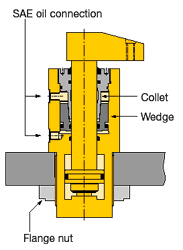 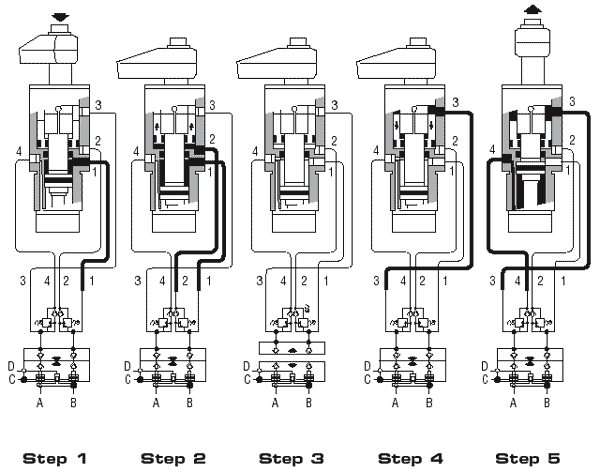 Here, a Collet-Lok swing cylinder is used to illustrate the operating details for a pallet system.

At a load/unload station, a part is place on the pallet. The 2-way auto coupler advances due to pressure applied at port C and connects an external hydraulic power source with the pallet. Hydraulic pressure is admitted via port B directly to port 1 of the swing cylinder. The cylinder rotates and moves to the clamped position.

With the plunger held securely by the wedge/collet, hydraulic pressure is removed from coupler port B and applied to port D to retract the coupler. The part on the pallet is now securely clamped without being connected to a power source. The pallet is stored or placed in a queue for the machining center.

After machining operations have been completed, the pallet is returned to the load/unload station. The auto coupler is again advanced by pressure at port C, and pressure is applied to port A, which feeds directly to port 3 of the swing cylinder. The pressure at port 3 forces the wedge downward to unlock the collet from the plunger. 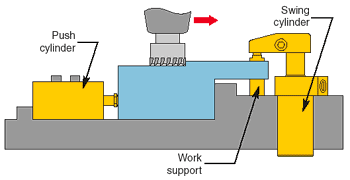 A typical setup includes these components:

Investing in a Collet-Lok system can pay handsome dividends. The low short-term cost of labor-intensive methods may be tempting, but think of the countless analogies. For example, if you were a paving contractor and had to regularly break up considerable amounts of old pavement, would you buy sledge hammers for your crew, or would you invest in a hydraulic or pneumatic jack hammer setup?