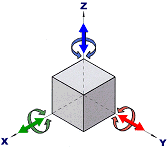 Putting it in Place

Workholding involves three steps: positioning, supporting, and clamping. In this chapter, we will examine specifics of the first step, positioning, in hydraulic workholding systems.

Positioning may seem a mundane matter, but a metalworking setup begun with insufficient attention to proper positioning is destined to poor results inconsistent finished parts and a high scrap rate. Before a machine tool can perform an operation on a part, it must “know” the location and orientation of the part. The accuracy of positioning significantly affects the accuracy of results.

A part (three-dimensional object) is said to have six degrees of freedom: translation and rotation with respect to each of three axes. Workholding objectives are to position the workpiece to specific coordinates and then restrain it from moving. As detailed in chapter 2, a set of three mutually perpendicular reference planes can be uniquely defined by three reference points in a first plane, two in a second, and one in a third. This fact gives rise to what is known as the 3-2-1 locating method.

Piston end-attachments, called “end effectors” or “contact bolts, “ protect the piston and the part during the pushing operation. Mounting versatility is provided by a selection of mounting blocks, also referred to as mounting brackets. Flange nuts, also known as jam nuts, secure threaded cylinders in place.

Selection of a positioning cylinder is dependent on several factors:

The geometries of the fixture and workpiece may dictate that the positioning moves be carried out in some sequence. Chapters 1 and 3 explained control valves that are used to accomplishing sequential operation of cylinders. The three most commonly used are:

The cylinders in a hydraulic circuit can be supplied with fluid in either parallel or series fashion. Parallel feed is the method of choice. When supplied in parallel, all cylinders receive pressure and flow simultaneously, so there are no inequities of pressure or delays in activation other than those intentionally incorporated in the circuit design. On the other hand, a series arrangement takes the least space and may be the best choice for a tight fixture.

Whether to supply hydraulic fluid to cylinders and other components by means of external plumbing (rigid tubing) or a machined manifold is a classic tradeoff of upfront cost vs. long-term cost. Tubing has the attraction of lowest upfront cost. A drawback is the extra cluttering of the fixture by the tubing and fittings. In addition to taking up space on the fixture, the external plumbing tends to collect chips

A manifold approach results in a “cleaner” fixture with less chip-catching hardware. Additionally, manifold-mounted components can be easily removed and replaced. Clearly, the length of a production run is a major factor in choosing between external plumbing or a manifold..