What is Bolt Tensioning
Tensioning is the direct axial stretching of the bolt to achieve preload. Inaccuracies created through friction are eliminated. Massive mechanical effort to create torque is replaced with simple hydraulic pressure. A uniform load can be applied by tensioning multiple studs simultaneously.

Tensioning requires longer bolts, and a seating area on the assembly around the nut. Tensioning can be done using detachable Bolt Tensioners or Hydraulic Nuts.

What is Load Loss
Load loss is a loss of bolt elongation depending on factors such as thread deflections, radial expansion of the nut, and embedding of the nut into the contact area of the joint. Load loss is accounted for in calculation and is added to the preload value to determine the initial Applied Load.

Manufacturer's rating of pressure and load are maximum safe limits. Good practice encourages using only 80% of these ratings!

Tensioning Operation
Tensioning permits the simultaneous tightening of multiple bolts; the tools are connected in sequence via a high-pressure hose assembly to a single pump unit. This ensures each tool develops the exact same load and provides a uniform clamping force across the joint. This is especially important for pressure containing vessels requiring even gasket compression to affect a seal.

General Procedure
Step 1: The bolt tensioner is fitted over the stud
Step 2: Hydraulic pressure is applied to the tensioner which then stretches the stud
Step 3: The stud's nut is wound down against the joint face
Step 4: Pressure is released and the tool removed

The bolt behaves like a spring, when the pressure is released the bolt is under tension and attempts to contract, creating the required clamping force across the joint.

Less than 100% Tensioning
Not all applications allow for the simultaneous fit of a tensioning device on each bolt, in these cases at least two tensioning pressures are applied. This is to account for a load loss in those bolts already tensioned as the next sets are tightened. The load losses are accounted for in calculation and a higher load is applied to allow the first sets to relax back to the target preload.

Set-up using a 100% tensioning procedure
All bolts are tensioned simultaneously. 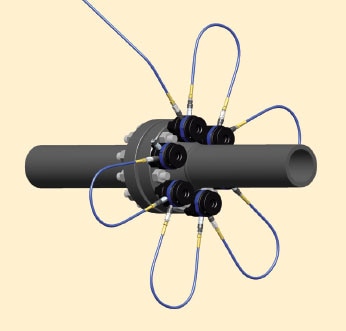 Set-up using a 50% tensioning procedure
Half the bolts are tensioned simultaneously, the tools are relocated on the remaining bolts and they are subsequently tensioned.