A device that applies clamping force to the workpiece.

The part or material that is to be held in place.

A device used to apply pressure to a hydraulic medium.

When properly designed and controlled, the hydraulic clamping mechanism will prevent the workpiece from moving (sliding, twisting, etc.) when machining or other forces are applied, yet will not cause an unexpected permanent distortion to occur in the workpiece.

The term “locating” refers to the process of positioning the workpiece inside the clamping device, and holding it in position for the necessary machining. Only workpieces that are correctly held can be consistently machined within specified tolerances.

2.1.2 Limiting the degrees of freedom

The process of locating and holding a workpiece may be referred to as “limiting the degrees of freedom.” Any motion of a workpiece in any possible direction is considered to represent one degree of freedom.

The degrees of freedom that a given workpiece or body possesses may be reduced by introducing reference planes that pass through any two axes.

For example, the plane in Figure 3a limits movement to travel in x and z directions and rotation about the y-axis. By defining this fixed plane, the workpiece can thus be limited or constrained to three degrees of freedom.

Another two degrees of freedom may be constrained by introducing a second reference plane, as shown in Figure 3b. This reference plane limits movement to translational motion in the x direction.

Constraining the last degree of freedom can be accomplished by defi ning a third reference plane as shown in Figure 3c.

The process of locating and holding a necessarily require the elimination of movement in all six degrees of freedom, the following three locating techniques are used in actual practice.

Figure 4a: Semi-constrained Workpiece. The workpiece is held in one plane only (elimination of three degrees of freedom).

Figure 4b: Constrained Workpiece. The workpiece is held by two planes (elimination of fi ve degrees of freedom).

a. Workpiece with locating planes

Over-location of the workpiece occurs when there is more than one locating plane or point for any given degree of freedom.

To prevent bending the b-c rib while machining the piece, a third reference plane (3) is introduced. Placing a workpiece (6) inside the clamping device (4) causes over-location. Since the distance between the locating planes (1) and (3) is constant in this device, the dimension c differs between individual workpieces. This over-location therefore gives rise to machining error.

Figure 5c: Shows how to locate a workpiece correctly. To avoid tilting the workpiece, the torque “M” transferred from the workpiece (5) to the body to be machined (6) must be balanced by an appropriate counter-torque. This counter-torque is created by the clamping force “F.”

Over-location may also occur if a workpiece (Figure 5) is limited by too many locating points. The introduction of more than three locating points along the bearing surface, or more than two points in the guide plane, or more than one point in the supporting plane may lead to undesirable workpiece motion, and thus adversely affect the precision of the resulting product. Any additional support points must be adjustable.

If the workpiece to be machined must be supported to avoid deflection, then all other bearing points must be defined as variables and must be determined in relationship to the workpiece being machined.

The location process is subject to a number of design guidelines, but exceptions are possible.

The term “clamping” refers to the secure fastening of an already positioned workpiece in a clamping device for machining purposes. Locating and clamping may be viewed as a combined operation.

Clamping is invariably associated with force transmission through the device. The force vector should, as far as possible, describe a straight line from the application point of the clamping force through the workpiece to the bearing points.

As with clamping, locating is subject to a number of design guidelines, although exceptions are possible: 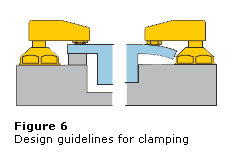 The dimensions of clamped workpieces may change due to vibrations and the effects of thermal expansion. Two types of clamping may compensate for these changes.

The illustration in Figure 7 (mechanical clamping) demonstrates that tension is relieved as the dimensions of the workpiece in the clamping area change.

In hydraulic clamping, the clamping elements gripping the workpiece adjust to changes while maintaining a constant clamping force. This is illustrated in Figure 8, where the workpiece is elongated due to temperature increases during machining.

Hydraulic clamping is achieved by:

The workpiece requires support to ensure functional force transmission between the tool, the workpiece, and the clamping device, and/or to protect the workpiece from deformation (such as deflection at points with a thin cross-section) due to machining forces, gravitational forces, and clamping forces. Workpiece support also acts to eliminate the resulting machining errors (Figure 9).

In addition, surface quality may be improved and the service life of the tool prolonged with the use of an optimum supporting mechanism. The three-dimensional position of a workpiece, however, should not be defined by its support. It is preceded sequentially by the locating process and also has a lower priority. 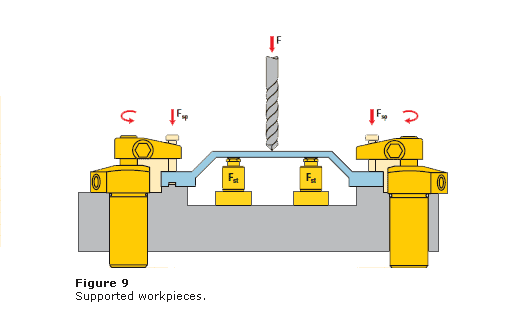 A workpiece is considered to be supported even if it must be supported by frequently mobile and variable elements surpassing the theoretical maximum number of locating points. An example of this would be an unstable workpiece that easily vibrates.

When a deformed workpiece must be held and clamped in all three planes without altering its shape, it is possible to use a technique involving selfadjusting spherical surfaces. In this case the bearing surfaces, the close-tolerance bolts, the limit stops, and the vertically adjustable supporting and clamping elements must be equipped with spherical surfaces.

The illustrations in Figure 10 illustrate two different clamping methods. It shows deformation of a workpiece caused by conventional clamping (Figure 10a). As a result of this deformation, the surface area of the workpiece exhibits a greater degree of deformation when unclamped.

This deformation, which is convex in shape, may be attributed to the fact that the workpiece assumes its original, deformed shape (c), as soon as the clamping pressure is released.

The clamping points illustrated in Figure 10b are spherically shaped, and can therefore largely adapt to the workpiece curvatures (b). The machined surface is therefore fl at, and the workpiece is only exposed to possible internal stresses that may be released by machining.

4.3 Determination of the clamping force

It is important to ensure that a workpiece that is clamped inside a device is not moved from its position by the clamping force and the subsequent action of the cutting force. This risk of movement may be minimized by applying the clamping force to the solid bearing surfaces of the device (Figure 11). 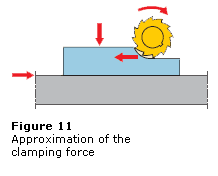