As ports grapple with the operational and logistical challenges of accommodating a new generation of super container vessels, their ability to upgrade existing crane facilities is critical. When Japanese crane manufacturer, Mitsui Engineering and Shipbuilding (MES), was faced with the need to increase the height of six Ship-to-Shore (STS) Portainer Cranes ahead of their delivery to Malaysia, the Enerpac JS-Series Jack-Up System provided a low risk, safe solution to the problem.

Larger container ships are now the norm as shipping companies seek to drive down freight costs. In 2014 and 2015, the global TEU (twenty-foot equivalent) capacity increased by nearly twenty percent. Most of this capacity was in the 10,000 – 18,000 TEU range, with the top end of the range now accounting for about 12.5% of the total global shipping fleet. Many port and terminal cranes have sufficient outreach but lack the height necessary to unload the containers. An 18,000 TEU (23 wide) vessel requires a lift height of 48m. Retrofitting existing cranes can mean raising the crane, weighing typically more than 1,500 tonnes, by 4 – 12m.

Mitsui Engineering and Shipbuilding is a leading supplier of Ship to Shore (STS) and Port Transfer cranes. Since 2005 it has supplied more than 300 STS Portainer Cranes to ports worldwide. Typically, the cranes are 40 m in height, however, having secured an order for 14 STS Portainer at the new height of 46 m to cope with the larger container ships, MES wished to increase the height of two cranes already manufactured, for delivery in early 2017. The remaining STS cranes will be manufactured at the increased height in MES’ newly expanded facility.

The Portainer crane is a large dockside gantry crane found at container terminals for loading and unloading intermodal containers from container ships. Weighing 1,650 ton, the crane has high rigidity steel structural frame supported on wheeled units allowing the crane to move from left to right along the quayside. Often multiple cranes will work together on a single megavessel simultaneously unloading and loading containers.

Crane manufacture at MES is performed using lifting towers to lift the crane’s upper section and slide the crane legs underneath. Unfortunately, the lifting towers were six meters too short. Initially MES approached Enerpac to supply strand jacks for use with the temporary lifting towers to provide the additional lift height.

"Strand jacks are one solution, but not ideal and can involve handling suspended loads while the leg extensions are added; requiring substantial, and time consuming, structural modification to the crane ahead of heightening. Instead we proposed that using the Enerpac JS-Series Jack-Up System would be a quicker and safer heavy lift solution; which MES liked," says Mike Miller, Integrated Solutions Business Leader - APAC, Enerpac.

MES contracted their transport and engineering services supplier, Binan Development, to undertake the crane heightening project with the Enerpac JS500 Jack-Up System, with a lifting capacity of 2,000 tons. The Jack-Up System comprises four hydraulically operated Jack-Up units positioned at each corner of the load. The load is lifted in increments as steel boxes are slid into each Jack-Up unit, and stacked to form ‘lifting towers’. Each unit’s lifting and lowering operations occur simultaneously; the system’s central computer control synchronises each Jack-Up unit and maintains the balance of the load. The Jack-Up’s base hydraulic units hold the load as boxes are added and removed during lowering.

Working with Enerpac, Binan’s approach was to keep the lift point as low as possible. To do this, the base of the crane was strengthened with two temporary beams above the front and back wheel units. In line with the temporary beams, four brackets were added at each corner to provide the lifting points for the JS500 Jack-Up System. These avoided the need for elaborate bracing of the crane used in other lifting systems; and were a major time saver.

The front and back wheel units were then rotated 90 degrees, while still supporting the crane, and the Jack-Up Systems moved into position at each corner beneath the bracket. The lifting process commenced with the addition of the first set of single boxes to transfer the load to the Jack-Up System. After which the new 6m leg extensions were added.

After load transfer, the front and rear wheel supporting beams were then slid inward and the Jack-Up System lifted the STS crane to 6.5 metres in 2.5 hours. The wheel supporting beams were then slid back into position, and jack down commenced with the 6 meter leg extensions in place. Laser measurements of the crane were taken continuously to monitor stability during the 6.5 meter lift. “Deflection from the top to bottom of each full leg was 0mm deflection in three legs and maximum 3mm deflection in one leg, with minimal side load effect. It remained like this for the entire lift and lowering – a clear demonstration of the Jack-Up System’s outstanding stability,” notes Mike Miller.

The entire lifting and lowering, and addition of the leg extensions, took just 3 days. In total, the crane heightening project was completed in 2 weeks, a significant time saving when compared with the 2 months typically needed when using other methods involving elaborate structural bracing of the crane.

Safety runs through the entire crane heightening project. Using the Enerpac JS500 Jack-Up System with temporary beams and support brackets allowed the crane’s lifting point to be kept as low as possible. This, together with the stability of the JS500, greatly reduced the risk of side load deflection during crane heightening.

The stability of the Enerpac Jack-Up System lift allowed a speedier crane heightening by removing the necessity to strengthen the crane structure prior to lift.

The close working relationship between MES, Binan Development and Enerpac was critical to the successful crane heightening. This showed itself throughout the project from familiarisation with Enerpac’s Jack-Up System heavy lift technology, to project planning and implementation, and even the development of a bilingual control interface in Japanese and English.

"The speed with which the heightening of the MES Portainer Cranes was completed is a clear demonstration of the way in which the Enerpac JS500 Jack-Up System has a significant role to play in enabling the safe, efficient and cost-effective upgrading of port cranes to meet the demands of super container vessels," concludes Mike Miller, Integrated Solutions Business Leader - APAC, Enerpac. 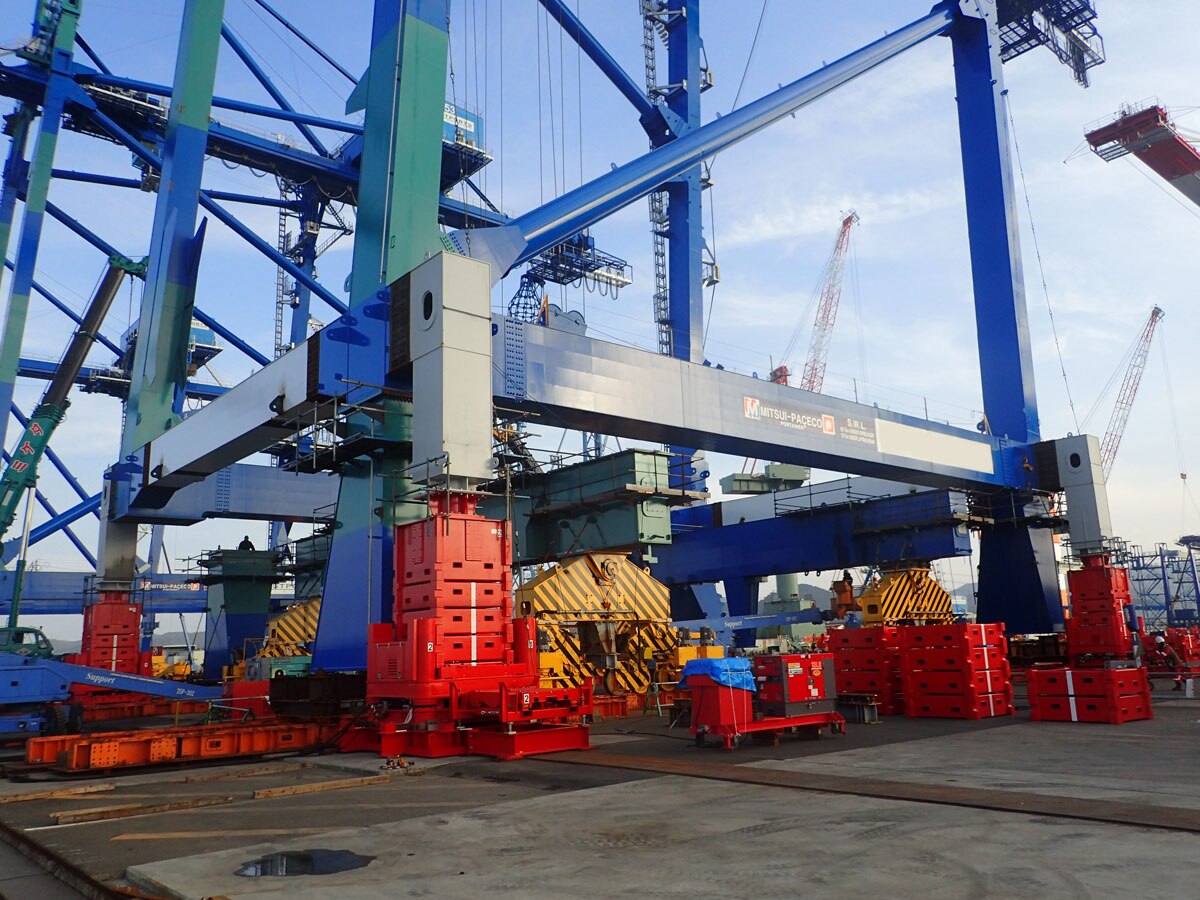